The Station is a two-storey building, constructed with traditional methods and materials, with living rooms on the upper floor and a garage on the ground floor. The outside staircase of the well-finished building leads to a balcony on the first floor along which you pass to enter this part of the building. The building is surrounded by a fenced area, which, however, is not as yet fully equipped. The natural habitat is a mixed forest of deciduous and coniferous trees with a prevalence of larch and holm.

Leave the SS 106 at Brancaleone Marina and drive until you reach Staiti. Take the main road running right through the village, until you come to a crossroads. Take the left turning in the direction of the cemetery and then take the right uphill fork. There is no sign at this junction, so, go right and continue along a narrow cement road with an extraordinary view of Staiti and Rocche Giambatore. This paved road becomes a dirt track road which takes you to the Cuvolo Station after about 6 kilometres. From Cuvolo the view embraces the countryside from Serro Carra to Bianco and allows you to appreciate the imposing grandeur of Monte Scapparone. 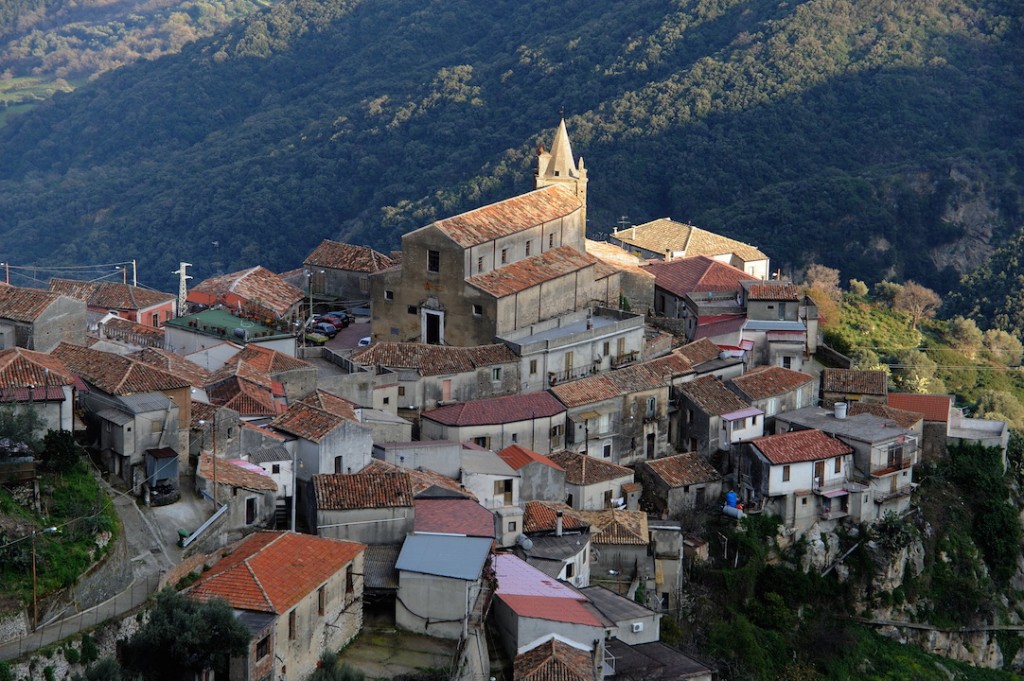 Resting on the crest of the Giambatorio outcrop on the southernmost slopes of the Aspromonte National Park, Staiti overlooks the large valley of the Bruzzano River.

The actual foundation date of the settlement is uncertain, though it seems to go back to the sixteenth century when it appears to have been a grange belonging to the village of Brancaleone, then governed by Geronimo Ruffo.

It takes its name from the Stayti family which became part of the Ajerbe d’Aragona dynasty following the marriage of Andrea Stayti Spatafora and Ippolita d’Ajerbe.

The fiefdom passed from the Stayti to the princely Carafa family from Roccella Jonica, whose property it remained until the abolition of feudalism.

The historical details regarding Staiti are fragmentary and not documented, so, it is hard to establish the exact date of its foundation. There is no doubt that it was a farming and pastoral community of no mean relevance, situated as it was, on one of the main routes linking the inland Aspromonte and the Ionian coastal areas.

It was, in fact, one of the places the English writer Edward Lear frequented and described during his travels here in the eighteen hundreds.

Staiti takes its name from its foundress, Ippolita Stayti.

The origins of Staiti are very old and recent studies have confirmed the fact that its original inhabitants were shepherds.

Originally a farmstead built by farmers and shepherds, around 1500 it was “baptised” by Eleonora Stayti who gave it the name and coat of arms of her own family. Unlike almost all the other towns and villages belonging to the Kingdom of Naples in the eighteenth century and whose economic conditions were precarious, Staiti was blooming. The village, 12 kilometres inland, is protected by a kind of natural barrier of solid rock, known as praca (smooth rock), which, due to its surface, pirates were unable to climb.

In 1811, an order issued by the land-commission released the town from its subservient position with regard to Brancaleone. Five years later, Staiti was granted its independence and became the administrative capital of the district comprising the municipalities of Brancaleone, Bruzzano, Ferruzzano and Palizzi.

The Stayti had the church of Santa Maria della Vittoria, [Saint Mary of the Victory], built between 1622 and 1633 in memory of the victory of the Christian armed forces over the Turks, on the 7th of October 1571. As the inscription on the façade records, the building was restored at the time when the bishop of Bova was Marcantonio Contestabile (1669-1699). In this same period the steepled bell-tower was erected, although its weight-driven clock was added later. Inside the first niche in the left-hand aisle there is a marble statue of the Madonna and Child dated 1622 while, in the right-hand aisle we find two Baroque altars, one dedicated to Saint Vincent and the other to Saint Anthony. The latter was commissioned in 1704 by the rector of the church, Franco Catroppa, and was originally dedicated to Saint Blaise [San Biagio]. The sepulchral stone covering the mortal remains of arch-priests Leocani and Carneri dates from 1711, while the holy-water font, commissioned by arch-priest, Laurentius Misitano, was installed later.

At thirteen kilometres from the Ionion Sea, on a slope below the Giambatore fortress, Staiti, has a typically Mediaeval layout, characterised by small low houses, cadenced by archways and narrow streets. One of these, called the circonvallazione [circular road], leads to an ancient fountain, decorated with an apotropaic mask. At the end of the hamlet stands the church of Sant’Anna [Saint Anne], restored in 1950 thanks to the endeavours of Don [Father] Amedeo Gavioli, also responsible for the installation of the rose window. Every year from the 24th to the 26th of July the town’s patron saint, Saint Anne, the mother of the Virgin Mary, is celebrated. A nineteenth-century wooden statue of the saint, wearing a crown donated by Fortunato Patti (+1882), who paid for it with the money obtained from the sale of a paricchia di vacche [a pair of cows], is borne through the streets in procession.

Nestling in the valley in the Badia district, on the way to Staiti, stands the ancient Norman-era abbey of Santa Maria de ‘Tridetti, the monument that epitomises the Byzantine influence over the Graecanic area.

THE FEAST OF SAINT ANNE

The festa di Sant’Anna, which is celebrated annually in the month of July, is the acme of the religious and civic life of the community. Emigrants return home for the occasion, while the faithful from neighbouring towns enhance the air of festivity while drums keep time to the days of the Novena.

The image of the saint is borne in procession to the parish church in Piazza Santa Maria della Vittoria. The celebrations are accompanied by fireworks, by the local band and by the ballo du sceccu [the dance of the donkey], a ritual recollective of ancient popular belief.

ResetProceed
x
x
To provide you with the best service, this site uses cookies and technical profiling, and its third-party.
If you want to learn more or opt-consult disclosures. Continuing browsing or clicking accept you consent to the use of coockie. Accept
Privacy Security