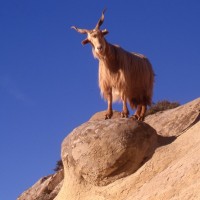 The goat is one of the Greek Aspromonte district’s most agile and graceful creatures. Present here from pre-historic times, it has adapted perfectly to the area’s meagre pasturelands and to the sheer walls of its mountain sides, thanks to its sense of balance which permits it to climb anywhere, even into trees. A goat can live on one tenth the food needed to feed a cow, while its milk yield is greater.

These animals were raised not only for their milk [in Greek gala] but also for their meat and hide, from which clothing, wineskins, drums and wind instruments, like the zampogna [Italian bagpipe], are made.

The famous ancient Roman cook Columella, sang the praises of the flavour of the goat flesh of Bruzio, recommending that of the gastrole, that is, adults who had not yet procreated. His is a recipe identical to that known today as vutana, that is, à là Bovese, where the goat’s meat, having been well marinated, is simply boiled and flavoured with bay leaves, onions and celery.

The abundance of goats in the Ionian Aspromonte area is mentioned later by the Arabian chronicler ‘Abu al-Fida (1273-1331), when referring to the enormous number of goats slaughtered on the slopes of the San Niceto castle, during a Saracen incursion. In Mediaeval times goat rearing contributed so considerably to the local economy, that strict regulations were applied to grazing. We know, in fact, that in 1116, Riccardo Amigdalia, allowed monks from the San Bartolomeo di Trigonio Monastery to brings some of their flocks into pastures within the Ionian Aspromonte area, while, in 1134 Ruggero II, conceded grazing rights in the Tuccio Valley to the Santissimo Salvatore di Messina archimandrite. Breaches of the norms were severely punished, as in the case of the Jew, Elia di Gerace, whose 500-strong flock, which his son had allowed to graze in land belonging to the San Lorenzo district, was confiscated in 1451. In the course of the sixteenth century, goat raising, along with silk-worm husbandry, became the chief source of income in the area, so much so, that the area’s feudal lords claimed and enforced a “tithe” of one animal in every fifty from the massari [farmers]. Therefore, during the modern age these animals were still highly cherished by the farmers of the Graecanic Area. In 1616, Marco Antonio Politi said that the gelding goats of Africo “were so unusually large and strong as to carry a load on their backs like horses”. A century later Domenico Alagna claimed that the goat’s cheeses of the Bova diocese “beat those of other districts for exquisite flavour”. This historian also recalled that the area produced a “first-class cheese and, no exaggeration, Europe’s most perfect raschi, as the salted ricotta is called here in the vernacular, because of the pastures and the fact of not removing the butter from the milk, which makes them fat and very sweet”.

Of these dairy products, we hasten to mention a traditional table cheese, called musulupo, the wolf’s mouthful, eaten only at Easter time. Similar to tuma or toma [a fresh, unsalted cheese made from curd] this cheese is still made using traditional craft methods and implements, and set in special anthropomorphic moulds called musulupare. It is eaten with whatever vegetables are in season, with pasta and, on Holy Saturday, it is the basis of an omelette typical of the Bovesìa district.

The animals are reared according to the age-old custom, the same used by the Greek and Byzantine shepherds who, for centuries, practiced transhumance, which meant transferring their flocks twice a year: once, in spring from the coast to the highly inaccessible slopes of the Aspromonte, and again, in autumn, in the opposite direction. Flocks of goats can still be seen all over the Graecanic Area

To obtain a better understanding of the bond between the Greeks of Calabria and the goat, it suffices to take a look at the variety of terms used to distinguish between the smallest differences existing between them. These words are the same as those still used on the island of Crete. A female goat in Calabrian Greek is called a ega, a male is a tràgo, a male kid a rifi, a female kid a chiùmera. A two-year-old goat is called a gastra, a one-year-old a annòtico, while, the entire flock is a jìdia. And that is not by any means all. A white-headed animal is called a barbarisca, while a grey goat is a canavèddhà; the black-haired, white-headed goat is called a sargopì, while the grey-haired, white-nosed ones are murinì. Hornless, they are papazza, large-horned tragùna. There are names both for animals that are sterile, zzìro, and gravid, òtimo, and even for goats that deliver twins, kemeddhàra…

x
x
To provide you with the best service, this site uses cookies and technical profiling, and its third-party.

If you want to learn more or opt-consult disclosures. Continuing browsing or clicking accept you consent to the use of coockie. Accept
Privacy Security

Any cookies that may not be particularly necessary for the website to function and is used specifically to collect user personal data via analytics, ads, other embedded contents are termed as non-necessary cookies. It is mandatory to procure user consent prior to running these cookies on your website.